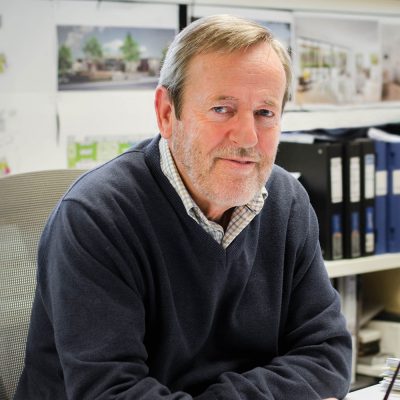 Gerard’s father Des was the founder of Smith + Tracey Architects and grew up in an architectural environment enriched by its ability to influence people’s lives.

Gerard became a Director of Smith + Tracey in 1982. He has a Bachelor of Architecture from the University of Melbourne and had worked in London for two years providing design outcomes for community housing projects.

Over the last 35 years his knowledge and experience in the design and delivery of educational, community and religious projects throughout Melbourne and regional Victoria has resulted in well received outcomes for Smith + Tracey clients and the broader community.

Gerard’s family background and passionate understanding of the liturgical directives for church design have seen him at the forefront of our exceptional list of suburban and country Churches, culminating in being the design architect for the Papal visit to Melbourne by Pope John Paul II in 1986.

Gerard’s is currently performing an ambassadorial role for Smith + Tracey both externally to our many repeat clients and internally as a mentor to our team, proudly instilling in them the values of the history and culture of the practice developed by the founders.